You Belong With Us: Adopting Priscilla 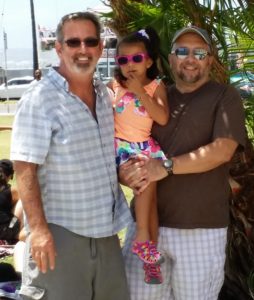 “She’s been the most incredible little light.”

Bruce and Michael originally thought they wanted to foster a teen. But one day, they arrived for foster parent training and saw a little girl who could not walk on her own or speak.

“She crawled up on me, and took to me like that,” said Michael. He immediately sensed  that Priscilla belonged with them, and offered to provide respite care when her foster family needed a night out.

Both Bruce and Michael received specialized training on how to give Priscilla her medicine and care for her when she had a seizure. And they provided respite care every chance they had.

Six months later, Michael got a call from Priscilla’s foster mother saying that she and her husband were being redeployed to Hawaii. She wanted to know whether Bruce and Michael would become Priscilla’s  foster family.

“Absolutely,” said Michael and Bruce, who immediately began preparing their home for the little girl. 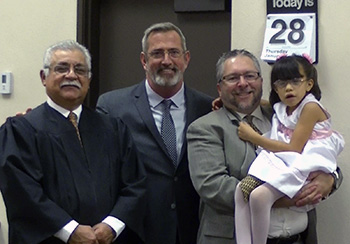 “She’s been the most incredible little light,” said Michael. “She has come so far, and taught us so much. I am the best person I have ever been because of this little girl.”

Although Priscilla is still not able to speak, she now communicates using an iPad. She has also learned to walk on her own and help in the  kitchen, and she loves to dance.

On January 28th, Priscilla received the best seventh birthday present ever. She, Bruce and Michael celebrated her adoption and officially became family.

Read more about Priscilla, Bruce and Michael becoming family in the Huffington Post.