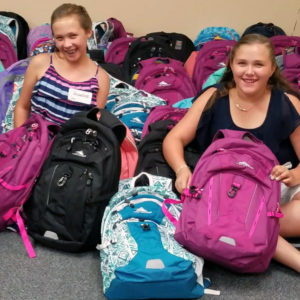 Jacqueline and Sheridan Crisafulli, 11, amid backpacks donated to Walden foster children and youth.

“We want to do this because it must be really hard to be a foster kid and not have your real Mom and Dad to be there to support you when you start out the school year,” wrote the girls in their letter asking family and friends to support the project.

Jacqueline and Sheridan first learned about Walden several years ago from their parents, who regularly attend Walden’s annual Wine D’Vine fundraiser. Their mother, Jennifer, explained that both girls became concerned that children in foster care didn’t have their parents to tuck them in or support them. The girls first gave to Walden in 2014, when they donated their birthday presents to foster children and youth. 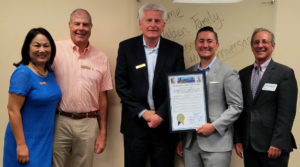 At the 40th anniversary open house, the girls met Councilmember Chris Cate (District 6) and council representative Sheldon Zemen (District 7). Cate and Zemen presented Walden with a proclamation recognizing Walden’s role in preparing children and youth to reach their full potential as members of the community.

Guests representing the public, nonprofit and private sectors enjoyed appetizers while learning about Walden’s history and impact on children and youth in foster care.